You are here: Home1 / Blog2 / Business Machines3 / Originals versus Copies

One of the first questions we ask every prospective client is whether or not the original, writing ink on paper, questioned document exists. If the original exists, we strongly recommend that clients make every effort to submit it for examination, but why is this so important? Today we will discuss a hypothetical case involving a request for a salary increase due to the ongoing pandemic. 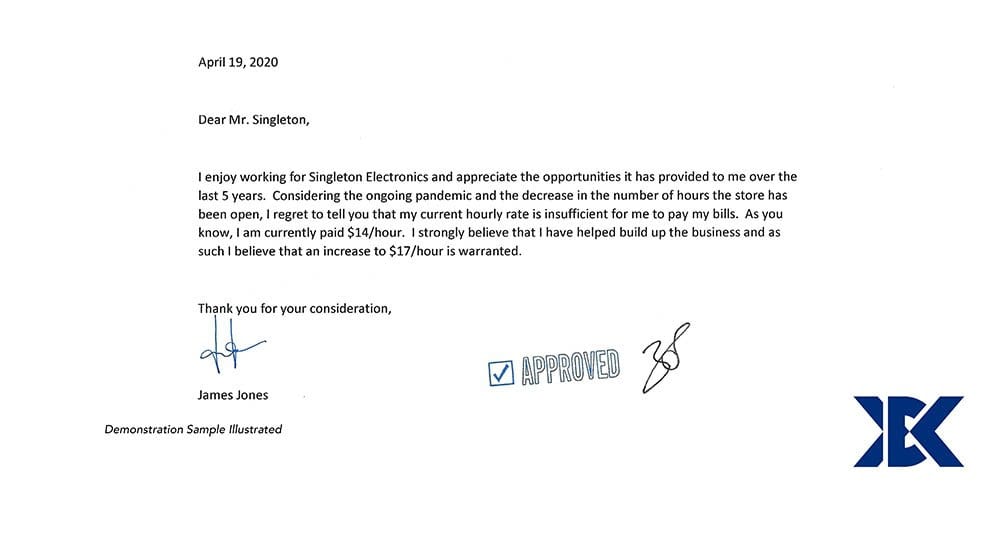 The above letter has been purported by Mr. Jones as an original, writing ink on paper, document approved by Mr. Singleton. At a macroscopic level, this document appears to be a typed letter with four major components – typed text, a signature of Mr. Jones, an approved stamp. and the initials of Mr. Singleton.

Based on the scenario presented, we would expect to find original inked entries for Mr. Jones’s signature, the approved stamp, and Mr. Singleton’s initials. Each of these entries were examined microscopically (images below).

We can see that the signature of Mr. Jones is original ink; however, the approved stamp and the initials of Mr. Singleton are both produced with inkjet. This evidence is indicative of a composite or manufactured document in which both the approved stamp and initials of Mr. Singleton were added to the document electronically rather than having actually been placed on the document.

This demonstration highlights the importance of the submission of the physical original document whenever possible. While we can examine copies or scans of a questioned document, certain types of evidence can only be fully evaluated through an examination of the original document.